Chris’ note: Like the overall stock market, crypto hasn’t been faring great in 2022. Bitcoin, the world’s most valuable crypto, is down about 33% since the start of the year. But at the Cut, we focus on the bigger picture. And tech expert Jeff Brown says this is just a temporary setback…

In fact, his top moneymaking idea of 2022 and beyond revolves around crypto. So this week, we’re featuring a series of essays from Jeff on this opportunity. Below, he kicks it off by showing why crypto is still one of the best investments out there.

First, I want to thank your editor, Chris Lowe, for turning over the reins to me for the next few days.

I’m stepping in at The Daily Cut to share with you my top moneymaking idea for 2022 and beyond. It’s an investment strategy I’m using in my personal portfolio.

If I’m right, this idea will help you not only beat inflation and sleep well through the stock and crypto markets’ current bouts of heightened volatility…

It’ll also turn small investments into generational wealth in the years ahead – regardless of what the market does next.

I call this idea “crypto placements.” They sit at the intersection of two of the most explosive asset classes – cryptocurrencies and private investments.

So to grasp their potential, we first need to understand the case for crypto assets and blockchain tech.

“What’s the Big Deal With Bitcoin?”

I first profiled the crypto for readers of my Near Future Report advisory in a special report back in 2015.

At the time, you could buy one bitcoin for about $240.

The title of my report was “What’s the Big Deal With Bitcoin?” That shows where the conversation was at the time.

Nobody is asking that question anymore. Today, bitcoin trades for about $29,388. Anyone who bought bitcoin after they read my report… and held on until now… is up 12,145%.

For instance, large corporations now own bitcoin in their treasury reserves.

Online payments processer Block (SQ) has $220 million worth of bitcoin on its balance sheet.

Tesla (TSLA) – the world’s most valuable automaker – has about $1.5 billion of bitcoin in its reserves.

And enterprise software company MicroStrategy (MSTR) holds nearly $4 billion worth of bitcoin as a reserve asset.

Meanwhile, some great platforms and exchanges have removed much of the complexity and risk from investing in bitcoin and other digital assets.

Investment management firms are also taking an interest. In April, 76-year-old firm Fidelity Investments said it would soon allow its clients to invest in bitcoin through their 401(k)s.

A New Internet Is Coming

Blockchain tech is the backbone of what will become the new internet, or what I call “Web 3.0.”

He outlined a “protocol” – a set of rules for sending data across a network – called Hypertext Transfer Protocol (HTTP).

This allowed a computer screen to display text that could take you to another piece of text using a hyperlink (what we now simply call a link).

Web 1.0 was basic. It relied on clunky, slow dial-up internet connections. And it was essentially a collection of static web pages connected to each other via hyperlinks.

Web 2.0 is what we have today. In the early 2000s, companies took advantage of faster broadband connections to offer new products and services online.

This let us upload videos and photos to social media platforms. It also let us stream TV, movies, and music on our laptops, phones, and tablets.

Facebook/Meta (FB), Netflix (NFLX), and Spotify (SPOT) are some well-known Web 2.0 companies. They disrupted legacy industries and offered new and efficient ways to connect and entertain us.

Now we’re in the early stages of Web 3.0. Blockchain tech powers this next generation of the internet.

It has more than just a new technological architecture. There’s a new philosophy behind it.

Web 2.0 is centralized. Big Tech firms in Silicon Valley control it. As a result, it’s prone to censorship.

Web 3.0, by contrast, will be open and decentralized. So it’ll allow the free exchange of ideas. It’ll prevent censorship… cut out middlemen… and allow users to profit from the content they produce online.

Web 3.0 apps can support virtually every area of our modern lives:

But I’m sure most folks have an important objection to investing in crypto and blockchain right now.

As I mentioned up top, bitcoin has risen 12,145% since I profiled it in 2015. But realizing that return was easier said than done.

Along the way, bitcoin went through eight drawdowns (peak-to-trough falls) of 30% or more.

And as I write, we’re in the middle of one of those stomach-churning falls.

From its peak of nearly $3 trillion last November, the sum value of all tradeable cryptos – aka the crypto market cap – has dropped more than 50%. It’s down to about $1.3 trillion.

There’s no sugarcoating it. That’s a massive wipeout of wealth. It’s more than the subprime mortgage market lost in 2008.

But as investors, we need to position ourselves to profit from long-term exponential growth trends in tech – even during wild volatility.

Even Amazon (AMZN) – arguably one of the greatest investment success stories in history – had a 90% drawdown early in its history as a public company.

So did Apple (AAPL). 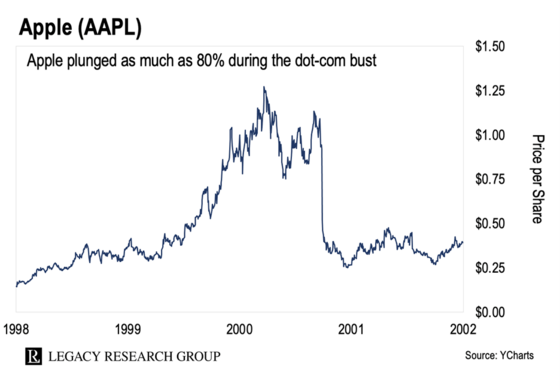 Amazon and Apple more than recovered. So will crypto.

The long-term growth trend in blockchain tech and digital assets is intact. But we’re getting some wild volatility along the way.

That’s why I’m so excited about crypto placements.

They give us exposure to the long-term trend of crypto adoption at the most attractive valuations.

Even better, because they’re still private, they protect us from the crazy volatility of publicly traded crypto. In my personal portfolio, crypto placements have been gaining value despite the pullback in the public markets.

I know it’s uncomfortable to sit through volatility. I’m in the same boat. I live and breathe the markets.

That’s why I want to share my perspective on this asset class with you.

I’m hosting a special event this Wednesday, May 18, at 8 p.m. ET, to show you how you can take part in these private investments – even if you aren’t an accredited investor.

And I’ll go into more detail on why crypto placements are so attractive in these uncertain times.

I hope you’ll attend. Especially if you’ve been losing sleep over the losses in your portfolio.

You can reserve your free spot here.

When you visit our website, it may store information through your browser from specific services, usually in the form of cookies. Here you can change your Privacy preferences. It is worth noting that blocking some types of cookies may impact your experience on our website and the services we are able to offer.